Apple is a multinational company and the second-largest smartphone maker. Apple has made its iOS a secured platform from the very beginning and is known for its security. No doubt iOS is the most secure OS for smartphones and its management of resources is outstanding. But that also comes at a cost. the most important problem iPhone users face is the transfer of files from their Windows PC or laptop to the iPhone. Owning an iPhone and Windows PC never goes in line. We know that iTunes is there but it’s quite bloated and almost a mess. Also, Apple limits the audio and video formats that can be transferred. The solution for this problem is to use third-party software that solves your problem How to Transfer files from PC to iPhone without using iTunes. One such software is WALTR Pro we are going to review in this article. We will discuss WALTR Pro features, Prons and Cons, Pricing, compatibility, supported file formats you can transfer, and how to use WALTR Pro.

What is WALTR Pro?

WALTR Pro is software by Softorino that allows users to transfer any type of file to their iPhones, iPads, and all generations of iPods. It provides a convenient drag-and-drop interface to quickly transfer files to iOS devices. It eliminates the hassle of iTunes and makes it possible to transfer unsupported file formats.

WALTR Pro is the upgraded version of the very popular WALTR 2. Softorino has added many new features and improved its performance in this upgrade. Check the comparison at the end of this article.

Why do You need WALTR PRO?

WALTR Pro is the much-needed software for Apple users. It removes the limits of file transfer between computers and Apple devices. You can transfer any type of file using WALTR Pro. It also supports Apple music, so if you can’t find a song in any of your music apps, you can download and transfer it using WALTR PRO. No need to worry about the file format, it’ll automatically convert it to Apple-compatible format.

For users who don’t want the nuisance of syncing with iTunes (on Windows) or the Finder (on macOS), WALTR PRO is the easiest and most efficient way to add files to their devices, converting files in formats not supported by the device to Apple-friendly formats.

In a Hurry? Checkout PROS & CONS 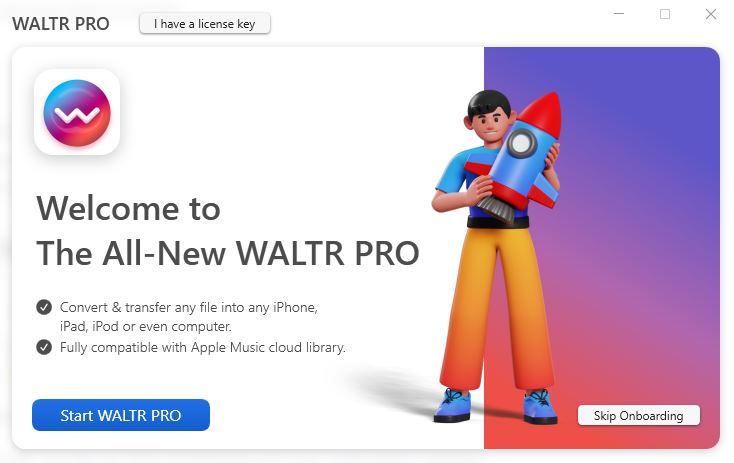 WALTR Pro has many useful features that will make your life easier:

WALTR PRO is a perfect converter that will quickly convert video and audio files into Apple-friendly formats. And yes, you’ll get the best output file quality. No buttons. No unnecessary settings to worry about. Just drag & drop to convert media files locally & save them to your internal or external drive as readable formats that Apple “respects”.

Siri on HomePod is great—but there are times when Siri cannot access or play our high fidelity music collection. With WALTR PRO, you can add files to Apple Music.

WALTR has long been the app of choice for users wanting to copy music and videos to their iPhone, iPad, or iPod. Now WALTR PRO provides full control over where your videos or music goes. Transfer videos to say VLC or music into your favorite music player. It works for literally any file.

By holding the Alt/Option key before transferring, users can copy Microsoft Word files, photos, text files, PDFs, and more by just dragging and dropping them on the WALTR PRO window, which then offers available target apps.

Support for every Apple device

WALTR PRO supports every iPhone, iPad, or iPod ever released, back to the first iPod from 2001, and is fully compatible with macOS Big Sur and iOS 14. It also offers full support for Apple’s new M1 Macs.

The simplest converter ever

For audio and video files, WALTR PRO copies files in formats supported by the iPhone, iPad, and iPod, while converting other files – in formats such as FLAC, MKV, or AVI – to compatible file types using Smart Adaptive Conversion 2.0. All this conversion is done automatically: users just drag, drop, and play. And with WALTR PRO, users can convert files and save them on their Windows PC or Mac in a local folder.

Users can also transfer music files directly to their cloud library to play on any device that accesses their Apple Music account, such as a HomePod, HomePod mini, Apple TV, or any other Apple device that can play music.

Users drag files on the WALTR PRO window and they are transferred to their iPhone, iPad, or iPod.

WALTR PRO for Mac & Windows includes a 24 hours trial with file transfer limitations. The full version of WALTR PRO is available for $35 as a yearly subscription. If eligible, existing WALTR users can upgrade to WALTR PRO at 50% off directly from the Softorino online store.

Softorino is providing 24/7 support for all the customers regardless of the license you choose. In case of any problem, you can contact them and they will solve your issue instantly. There is also a knowledge base where you can find your solutions mostly. Moreover, they have a 30-days money-back guarantee for all purchases.

Compatible with all iPhone and iPad models and legacy iPods.

WALTR PRO requires macOS 10.13 & above / Windows 7 or above. All Apple mobile devices are supported starting from iOS 5 including every single non-iOS iPod ever created.

WALTR PRO is a lightweight software and not resource-hungry. You can use it on any system running macOS 10.13 & above or Windows 7 & above smoothly. I didn’t notice any lag on my Windows 10 i7 laptop. As far as system requirements are fulfilled, it will run smoothly without any lag. I have used it over WiFi and the speed of file transfer is quite good. I have transferred a couple of files of different formats to my iPhone XS and worked quite well.

Drag and drop file transfer makes it easy to use. There is no need to manually select each and every file. Just select all the files and drop them to transfer.

How To Use WALTR Pro?

Using WALTR PRO is easy and simple. I’ll only briefly describe it here as it is a review article. I will write the full tutorial separately.

WALTR Pro is a must-have tool for iPhone users having Windows PC and is also helpful for Mac users. It offers seamless data transfer with a simple drag and drop interface over WiFi and automatically connects with a companion app for the iPhone. It has the support of 36 file formats and removes the limits. You will be able to kick out buggy iTunes.

If you spend a few bucks to get rid of iTunes then WALTR Pro is the best option to consider. Although there are many third-party software, WALTR is the most popular and recommended since its launch and WALTR Pro has many new useful features added in the latest update.

WALTR Pro has a trail with limited functionality. For all the features, you have to buy it.

Is it safe to use WALTR PRO?

Yes. All communications between your web browser and Softorino, as well as between our products and our servers, are secured by SSL encryption.

What are the main tech requirements for WALTR PRO (minimum OS supported)?

Can I install WALTR PRO on my iPhone or iPad?

No. WALTR PRO is a desktop software application. You can only install WALTR PRO on your computer. You can transfer files from Mac or Windows PC to Apple devices (iPhone, iPad) via USB or Wi-Fi.

How to transfer photos/pictures to iPhone with WALTR PRO?

With WALTR PRO it is possible to transfer pictures to alternative apps only. Just hold the Alt (Windows) / Option (Mac) button while dropping the files to the WALTR PRO app, and then choose the application where you want your pictures to be imported.

Does WALTR PRO support export from iPhone or iPad to Computer?

No, WALTR PRO doesn’t support such an option. It is dedicated to transferring files from Mac/PC to Apple mobile devices only.
5/5 (3 Reviews)
5/5 (4 Reviews)