Samsung officially revealed the new Galaxy S8 and S8 Plus and it seems safe to say that we got what we expected. The lack of a home button; the new AI assistant; the near bezel-less, curved screens; the rear-mounted fingerprint sensors — all the leaks were true. What ultimately matters more than the lack of surprises are ambition and keen execution, and Samsung clearly embraced both when building the S8s. It’s a good thing too: After the Galaxy Note 7’s rise and fiery fall, Samsung needed to prove that it could craft some flawless smartphones. Well, I’m not sure about flawless, but the S8 and S8 Plus are both gorgeous and full-featured — for now, the good certainly seems to outweigh the bad.

If there’s one truly major change about the Galaxy S8 and S8+, it has to be design, and with it the display – inseparably intertwined these two. Bezels are so very last year, and in 2017 everyone is trimming every possible millimeter that’s not display.

One thing that’s survived the upgrade is the headphone jack. Six months after Apple took the heat for shipping the iPhone 7 without a standard 3.5mm plug, the Galaxy S8 still has room for the old port. 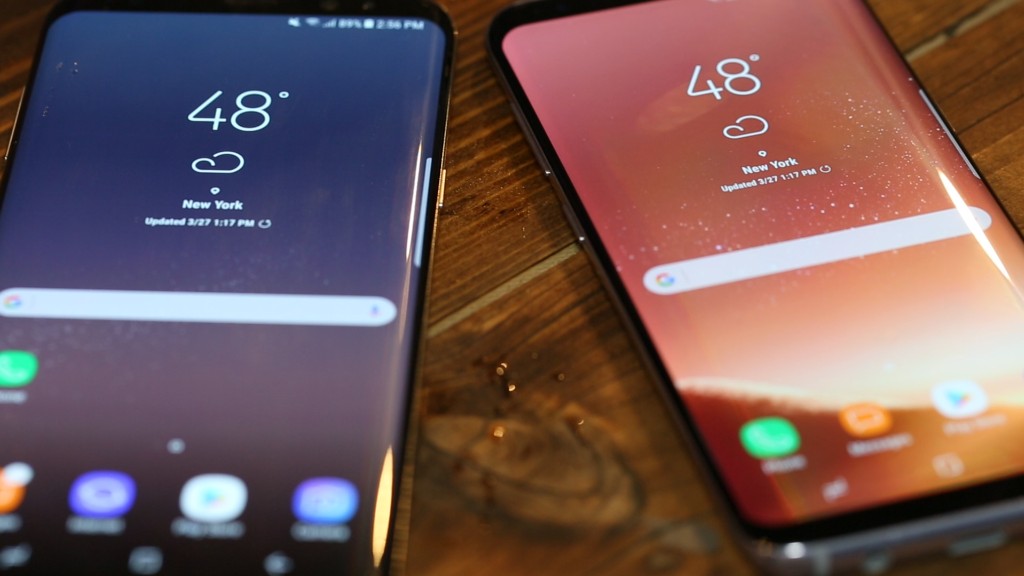 The former packs one of Samsung’s beautiful “infinity displays” — that’s a Super AMOLED screen that wraps around the phone’s curved front to the point where it almost touches the metal band running around the device. Both run at what Samsung calls Quad HD+ resolution, otherwise known as 2,960 x 1,440, since these screens are longer than normal.

The fingerprint sensor had to go somewhere, so it’s been relocated to the back. And boy is it an odd location. On one hand, it’s not placed along the central axis, so it favors right-handed operation – is it just us or is it more natural to reach out with your finger diagonally across the back than on the same side. Of course, vastly more righties than lefties in the world, but here’s one righty that uses his phone mostly with the left hand.

Samsung is touting the safety of the S8’s battery, given that the cause of the Note 7 fires was due to faulty battery design. A Samsung television commercial released earlier this year shows engineers testing batteries by drilling a hole and apparently heating them in what the company called an “eight-point battery safety check.” The company says the standard S8 model has a 3,000 mAh battery while the Plus version has a capacity of 3,500 mAh.

Both devices also have 12-megapixel, dual pixel rear cameras with an f/1.7 aperture, which, yes, are very similar to last year’s S7 cameras. That said, Samsung has apparently changed the way photos are processed, which should make for slightly better colors and clarity throughout. 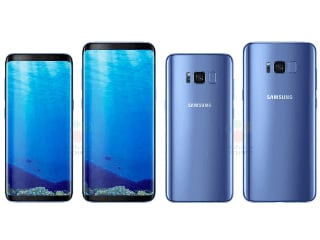 More importantly for our uber-vain generation, the S8s have an improved front-facing camera: an 8-megapixel sensor with autofocus and the ability to shoot wide-angle selfies. In a nod to apps like Snapchat, Snow and countless others, Samsung has included goofy filters and stickers to festoon your photos. The stickers are fine, but some of these filters straddle the line between hilarious and horrifying.

To read your irises Samsung has fitted a dedicated camera, making the cameras on the front officially two (the 8MP selfie camera being the other one). That makes for a pretty crammed top bezel, which also needs to house the earpiece, the ambient light and proximity sensors, a notification LED, and the IR illuminator that enables the iris scanning to work in the dark. Good thing then that all S8s regardless of back color will sport black faceplates – imagine the Swiss cheese that bezel would have been if it matched the body paint job, all dotted with sensor cutouts.

As you might have already known, the US Galaxy S8 and S8 Plus will feature one of Qualcomm’s octa-core Snapdragon 835 chipsets, along with 4GB of RAM and 64GB of internal storage. Versions available elsewhere will have one of Samsung’s octa-core Exynos chips in lieu of Qualcomm’s stuff, which will be a bummer for some people and old news for others. (The Exynos-equipped Galaxy S7 seemed to have a few advantages over the US, Snapdragon 820 model, but we’ll see if that shakes out the same way this year.) Both devices also have 12-megapixel, dualpixel rear cameras with an f/1.7 aperture, which, yes, are very similar to last year’s S7 cameras. That said, Samsung has apparently changed the way photos are processed, which should make for slightly better colors and clarity throughout.

More importantly for our uber-vain generation, the S8s have an improved front-facing camera: an 8-megapixel sensor with autofocus and the ability to shoot wide-angle selfies. In a nod to apps like Snapchat, Snow and countless others, Samsung has included goofy filters and stickers to festoon your photos. The stickers are fine, but some of these filters straddle the line between hilarious and horrifying.

The Galaxy S8 and S8+ run on Android 7.0 Nougat complemented by a Samsung custom overlay on top that’s become known as Grace UX. Introduced on the Note7, it was later brought to the A (2017) series (where it was bolted on top of Marshmallow), and now we see it on the S8.

A much sleeker UI, Grace UX replaces the tainted TouchWiz that some folks like to bash just for kicks now, based on early releases when the hardware wasn’t powerful enough to support all the features Samsung crammed in it. Anyway, our experience with Grace has been positive and there’s no reason to expect less than that from the S8 in the long run.

There are a few design tweaks for the new generation, naturally. Icons are even more rounded now to better match the display corners (or, rather, lack thereof). The app drawer is evoked with an upward swipe, Pixel-style.

The navigation buttons have gotten a fresh look, and whaddayaknow, Samsung’s done the unthinkable and made them customizable – you can now have the back key on the left and the task switcher on the right like Google would have it.

See Also:  How to change the navigation Keys order on Samsung Galaxy S8 & S8 Plus

Bixby is Samsung’s all new personal assistant – apparently, you can’t go without one if you are trying to push a high-end smartphone in today’s market. At least this one has a name unlike Google’s utterly impersonal ‘Assistant’. 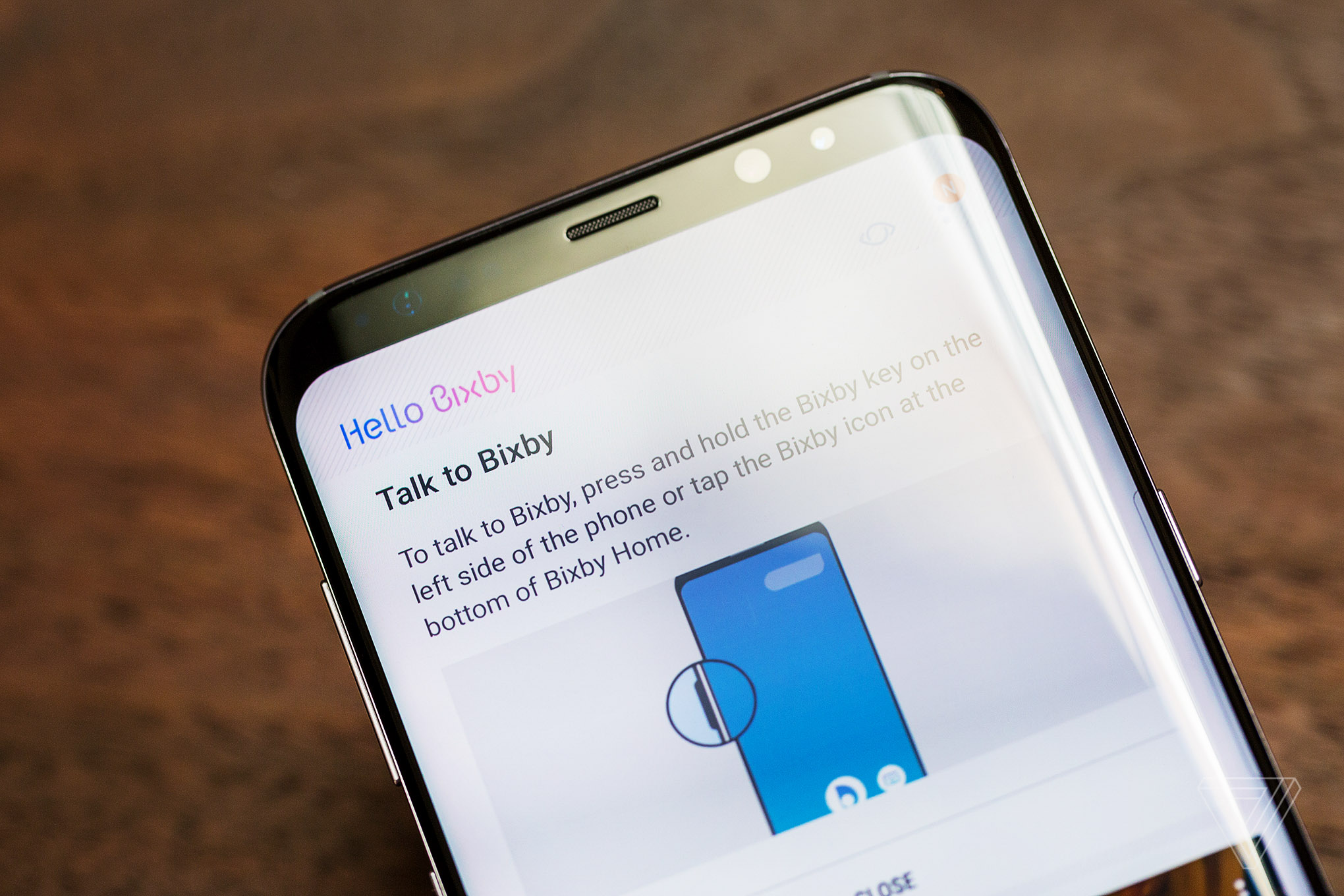 Samsung’s mantra when making Bixby was that “whatever you can do with touch, you can do with voice”. You can also mix and match types of input – whether it is talking, tapping or typing (they could have come up with a TTT trademark here, and we appreciate they didn’t), Bixby will use contextual cues to figure out what you’re trying to get at. For example, if you ask it to “call David”, and have multiple Davids in the phonebook, it’ll ask which one in particular.

You summon Bixby either with a trigger word or with that dedicated hardware button on the left – a simple press brings you a Bixby Home screen, similar to Google Now’s. In there, you’ll be greeted by a summary of your agenda, weather and upcoming reminders.

Another major new feature that will see a worldwide launch is Samsung DeX, short for Desktop Experience, which allows users of the S8s to dock their phone and use it as a full-blown desktop computing environment, with keyboard and mouse control, and access to suites such as Office and Autodesk through a virtual desktop service.

How to Fix “com.google.process.gapps has stopped” on Android