Huawei has just announced its two new flagship smartphones – the Huawei P10 and P10 Plus – at a press conference the day before Mobile World Congress 2017 kicks off in full in Barcelona.

The new devices have improved designs, enhanced camera technology and a few other upgrades to refine the already impressive Huawei P9.

Although Huawei is the third-largest phone manufacturer in the world you’d hardly know it in the west – but the P10 could be the phone to change all that. Much of the Huawei P9 design language is still present in the Huawei P10, but there are a few key changes.There are eight different versions of the phone, so bear with us. All of them have a metal uni-body, but one is called ‘ceramic white’ and comes with a ceramic-like design.You can get the new ‘Dazzling’ version that embraces a new finish called ‘hyper diamond’ and won’t show up fingerprints like other phones do. That comes in either blue or gold.

Then there are the normal stainless steel versions of the phone that come in green, silver, gold or rose gold.

There’s a 3.5mm headphone jack along the bottom of the phones, with a USB-C connector port in the center and a speaker grille on the other side.

Along the top rear are the dual camera sensors, which sit flush to the surface – there’s no camera bump at all this time.

Despite rumors of a curved QHD display, Huawei has decided to stick with the 5.1-inch Full HD panel we saw on the Huawei P9.

The lack of an upgrade in the screen department is a little disappointing, but it still offers 432 pixels per inch and is protected by Corning’s Gorilla Glass 5.

If you want a QHD screen you’ll want the Huawei P10 Plus wit its 5.5-inch display. That’s a touch larger, and is what’s called a WQHD display to reflect its expanded 16:9 aspect ratio. 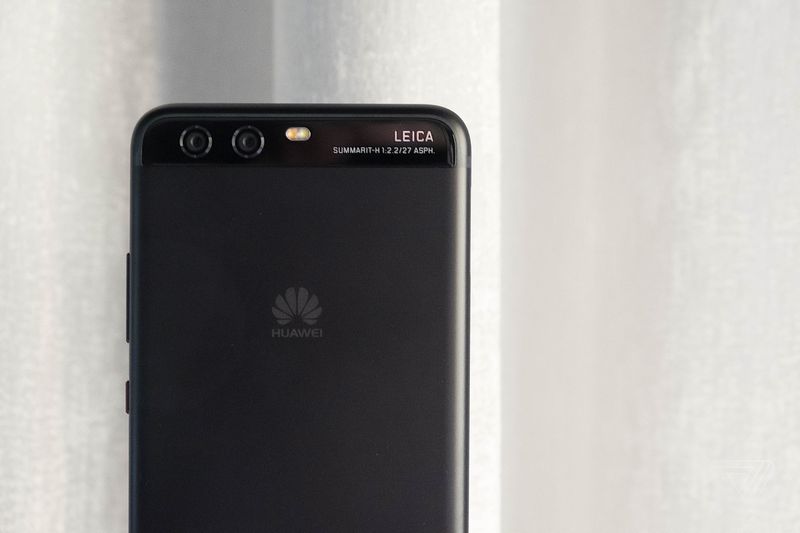 Huawei has continued its partnership with Leica for the P10 and P10 Plus, and has included a 12MP RGB (color) sensor that works in tandem with a 20MP monochrome (black and white) shooter.The camera captures the same image with both sensors, and then combines the two. The idea is the black and white image will be able to capture more detail and contrast, offering far better picture quality than a single sensor.There’s a fast aperture of f/1.8 too.

This year, Huawei is extending the Leica branding to its front camera as well. It’s an 8MP shooter, as on the P9, but will be able to track 190 different location points to identify where faces are in a shot. and it’s doubling the brightness and extending the dynamic range. It also has an “adaptive selfie” feature built in, which will detect whether you’re taking a solo or group selfie — a groufie, in Huawei parlance — and will automatically expand to a wider angle for the latter. I like that, it’s a bit of automation that truly helps people without loading them up with extra widgets to adjust or things to be cognizant of.

Huawei is using its latest Kirin 960 chipset in the P10, which should allow for it to reach new heights compared to the processor in the Huawei P9. It’s the same setup in the Huawei P10 Plus.

Huawei has stocked the P10 with 4GB of RAM and 64GB of storage – that’s the only storage option for that phone. The P10 Plus has either 4GB or 6GB of RAM, depending on which version you want to opt for, with 128GB of storage on both.There’s microSD support up to 256GB.

Software-wise the phones are running the latest Android 7 Nougat softwareEach phone is also running Emotion UI 5.1 on top of the Android 7 software, and comes with a number of improvements including predictive fingerprint technology.

We will give detailed review once the company make it available in the markets.

Huawei Freebuds 3i Review: Great ANC And Gestures Control At A Budget