Android Screen Recording was a tedious job that required rooted Android device and need to be connected with PC. Google start to support screen recording after the release of Lollipop.

There are many apps in Google Play Store to record your Android Screen. All of these apps are supporting screen recording for Android Lollipop devices without rooting. If you have Android 4.X Kit Kat, you may still need to root your device to work with screen record application.

This application is currently unavailable on the Google Play Store, but it has a lot of unique features, so I couldn’t leave it out.SCR supports Android 4.0 and above, although you need root access to be able to use it on Kitkat and Jellybean. In addition to recording your screen, it can record audio or even add a front-facing camera overlay, which is cool if you want to use it for YouTube videos and the like.

Az Screen recorder supports only devices running Android Lollipop and later. It does not require root and has an option to pause and resume recording, which is very useful for making tutorial videos and such. It also has a front-facing camera overlay feature, but it requires a paid upgrade to unlock this. You can change settings like resolution, frame rate, bit rate or even feature a text message or logo along with the recorded screen cast. Audio recording is also well supported.

This app allows you to take an unlimited length of screencasts on your Android device. Like most others on this list, it requires Android Lollipop. It can record audio as well, and it saves your screen recordings in a dedicated folder on your SD Card, but you can change it to a different directory if you prefer. You can tweak different settings to your taste such as video codec, resolution, and audio sampling rate. It is completely free, but you are encouraged to donate to the developers.

ilos screen recorder is another app that’s only available on Android Lollipop and later. It does not require root, and there are no ads or time limits for screen recording. Once you open the app, it will prompt you to register or sign in, but you can ignore that and tap the big button in the middle to start capturing. It will pop out a notification, and you can hit “Start” to begin recording. You have to go back to the app to stop the recording. Once you are done, you can view your screencasts from within the app or share them using Android’s share feature. 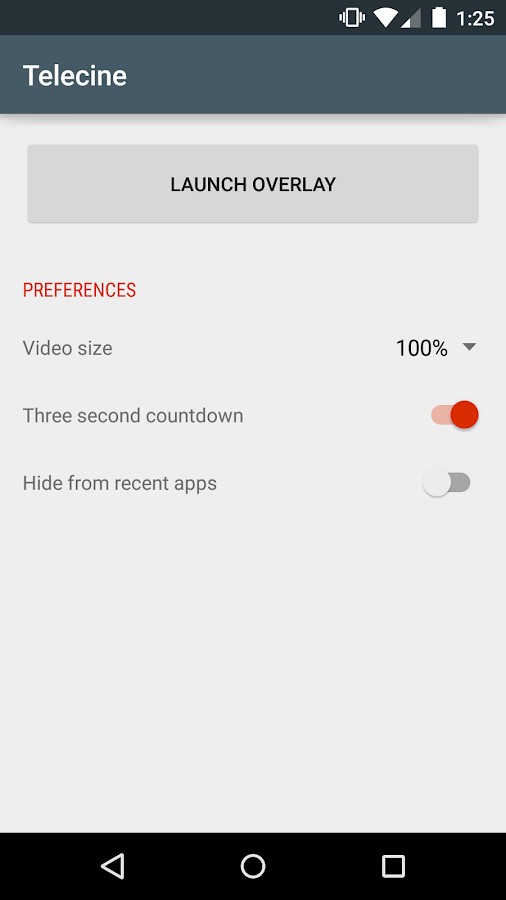 Telecine is a highly-rated application for recording your screen. It has a very simple interface with only a few settings, but it is very powerful and works well. Once you’ve opened the app, tap the “Launch Overlay” button. It will pop out a small overlay at the top right-hand corner of your screen. Navigate away from the app, and tap the record button once you’re ready to begin. To stop recording, tap the top-right corner again. (The overlay is still there; it’s just transparent.) The only downside is the lack of sound, but the video quality is top-notch.

DON’T MISS: 6 Awesome Things You Can Do With Your Smartphone Camera

As the name implies, this app is only available on Android Lollipop and later. It is one of the simplest apps on this list and only gives you basic options such as resolution and screen orientation. To start recording you need to open the app and click the icon highlighted above. To stop recording, just hit the app notification. It can record audio as well, but that’s about it.

Shou.TV is the free screen recorder for Android devices, without ads. This app does not require any root if you are using Android 5.0 Lollipop. If your Android device is 4.x Jelly Bean, it need to be rooted.

This app can even mirror your Android screen to Apple TV and web browser with Shou.TV. Shou.TV is free and provides unlimited recording time and size with no ads and watermark.

One Shot Screen Recorder is worth to be mentioned in this article. The authors of this application sought to simplify the video recording process, and it can be stated with certainty that they got it. To start creating a video, you need to run the application, select the desired screen and tap on the red button to activate the recording. One Shot Screen Recorder is a free software, but watermarks in the video will periodically resemble the need to purchase the paid version.

FREE screen recorder NO ROOT is a convenient tool for recording videos from the screens of Android devices. It does not require root. With this software, you can record videos with sound and gestures. You can even share recorded videos with friends on YouTube, via Facebook and Twitter.

This app has a perfect functionality and at the same time is easy to use. The interface of the app is user-friendly and quite simple. You can try it right now!

It is one of the high-rated apps for screen recording. All in all, it is a simple app which will be a great helper for you in recording a video from the screen. It is possible to download Screen Recorder for KitKat application free of charge via Google Play store.

The app has a number of useful features. You can set resolutions, bitrate, countdown and rotate your video.  The recording time can be up to 180 seconds. How to start recording? You are just to tap the “Record” button and the application will start recording a video.

The interface of the app is clear and simple. So, every inexperienced person will not meet any problems how to use it.

Rec. is a beautiful screen recording app, providing untethered, flexible and fully configurable screen recording capabilities for your Android device. Rec. (Screen Recorder) app requires your device to be rooted if you are using Android 4.4 Kit Kat. This app works in Lollipop without any additional rooting.

Rec. (Pro) provides additional features including longer screen recording, with Audio up to 1 hour and supports audio recording via your microphone.
Free version can use to record with audio for 5 minutes.

MOBILE USERS ATTENTION: Please use well reputed browsers like chrome, firefox for smartphones and don’t use cheap mobile browsers like UC browser because they will not work for our site.

Pokemon Go tips and tricks: A complete guide to the 'Gen 2' update