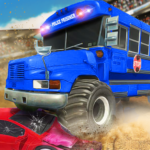 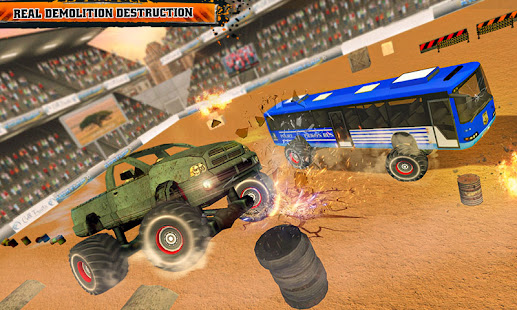 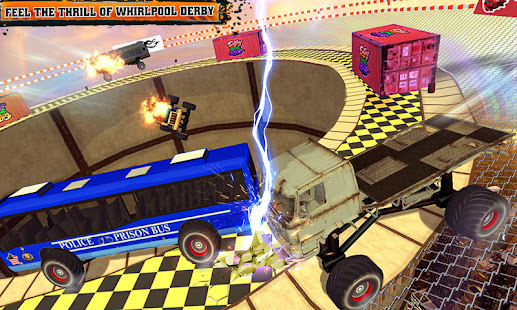 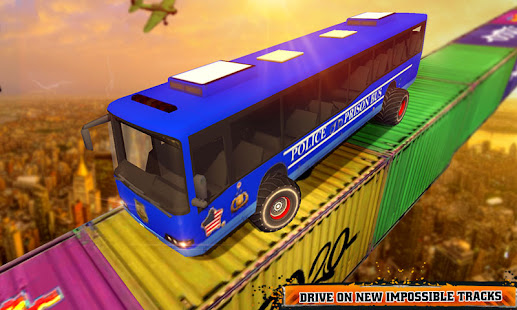 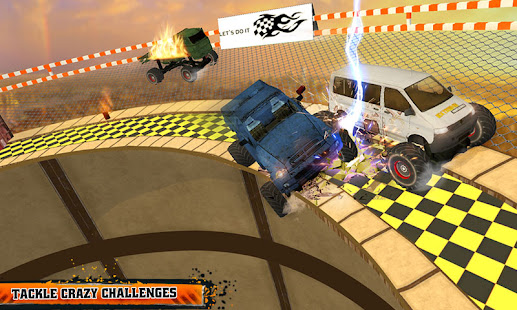 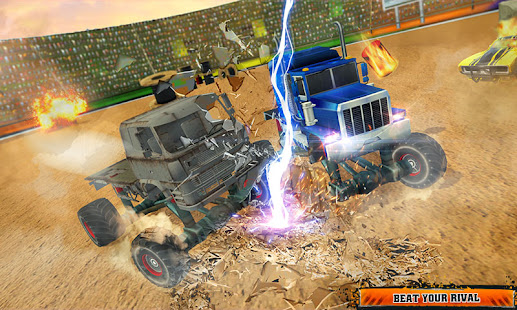 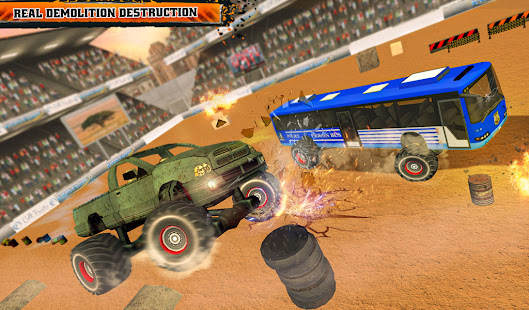 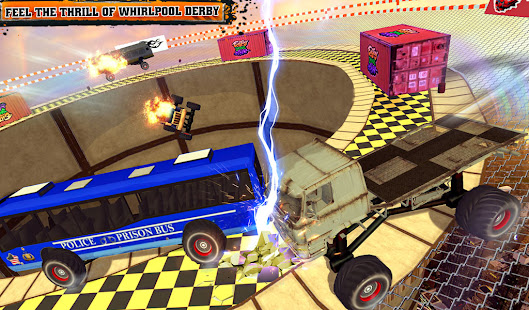 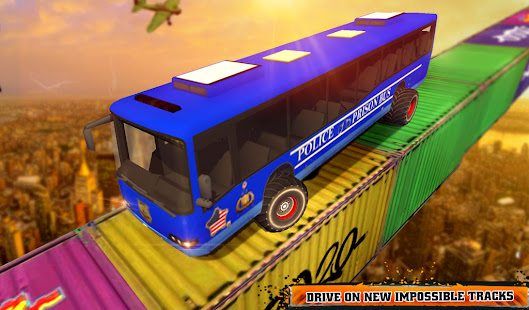 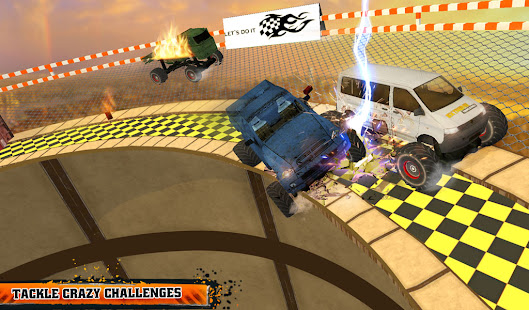 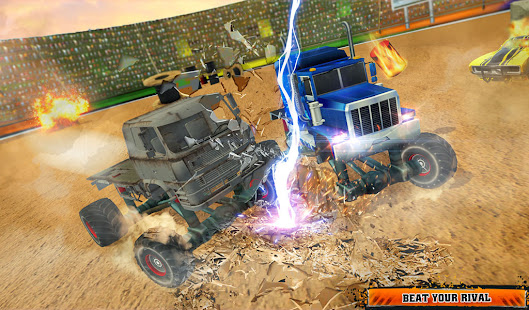 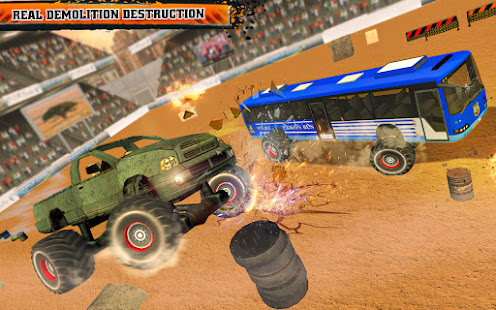 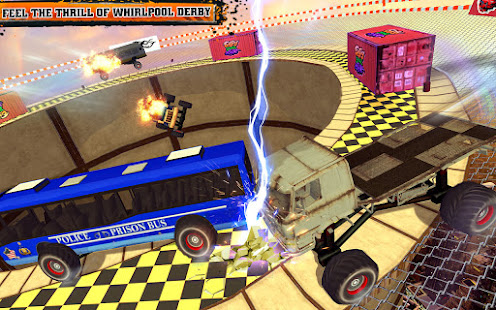 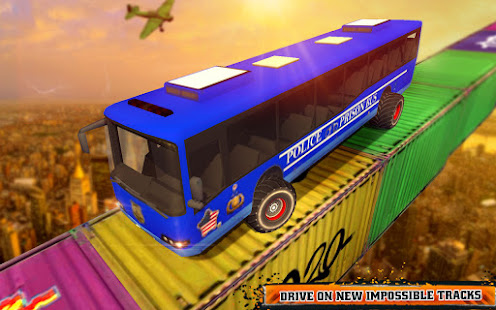 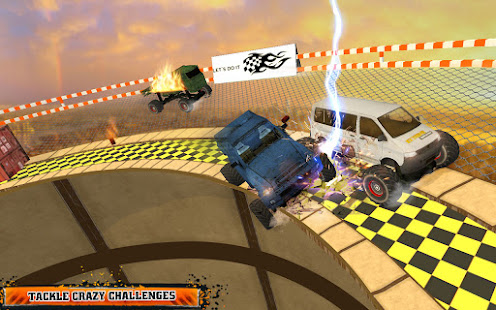 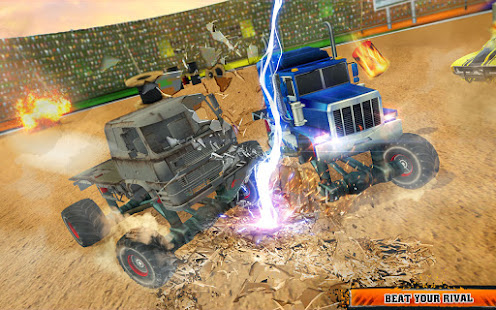 Ultimate war begins! Welcome to the extreme real demolition derby prisoner bus crash simulator with offroad fun!
Are you ready to perform the extreme demolition crash racing stunts in the demolition arena?
Yobro Studios presents you an amazing derby destruction adventure game with an impossible extreme demolition prisoner bus drive. Get behind the wheels of the best destruction US Police Prisoner Bus in this astonishing Whirlpool Demolition Derby Crash Stunts Game 2021. In this fearless wreck fest offroad demolition Crash stunt game, you race the opponent’s car to knock out, destroy, damage, and demolish recklessly with extreme derby buses as a destruction driver. A real championship has been held. Are you crazy enough to join this top-secret derby crash driving destruction league to tackle crazy challenges? So, jumped into an action-packed exciting, and thrilling fun game for destruction lovers who are fond of crazy banger racing. Use extreme driving skills and launch into the world full of mud road rough terrain in the offroad championship arena and experience the heart-stopping deathmatch full of muddy mayhem.

It’s a kill or be killed situation full of crowd screams. Be a fearless demolisher, speed up the prisoner demolition bus in a driving crash simulator on impossible paths to smash, and bang the opponent’s vehicles on your way to the lead in this fun and exciting real whirlpool demolition game inspired by ultimate destruction derby arenas all around the world. Fasten your seat belt, hold your steering tightly, perform drifts, and hit your police prisoner demolition derby bus as hard as you can to crush them into pieces. performing a dodge and jump on top of their car and trying to either take or wreck their vehicle to get a wreck as in car wrecking games. It’s an epic derby crash racing battle with spectacular physics-based gameplay! Take a monster jump with a prisoner bus big wheel and destroy all the demolition derby rival cars around the car crash derby game battle and experience this derby bus racing offline game and become an offroad legend in the extreme car destruction championship. Opponent cars try to destroy your amazing police prisoner derby bus, be a game-changer and blast your opponent’s car into wreckage in hard-hitting.
.

Are you a rebel? So charge to get your breakers ready for action! Get ready to pounce wheel jump on one of your enemy’s vehicles. Keep an eye on your opponent’s destruction vehicles and give them a wide berth to doge and smash their cars over the derby whirlpool. It’s a wipeout in the war zone situation only the strong demolition derby battle car survives. Show off your epic and thrilling action, take drifts and perform risky stunts on the extreme muddy tracks to get more points.

So, hurry up to become an extreme bus driver of real derby games and win the title of the real crazy destruction bus driver. Each level has multiple challenges to complete beyond just winning the match, be a sandbagger, build your bus to specifications set by the race track for the compact bus class, hit another car every second, and smash them by taking huge wheel jumps. It’s a day of destruction, forget the roads, it’s all about demolition derby stunt racing and smashing a car with thrilling demolition fighting adventure on challenging rough paths. Join the battle, have fun smashing and destroying your adversaries and get the ultimate derby bus driving experience now!