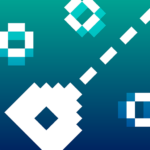 More hardcore than it looks! An exhilarating one-hand 2D shooter featuring minimalistic pixel art.
Control your ship as it powers up, flashily taking down countless enemies.

Play against rivals from around the world to post your high score on Google Play Game Services.

■ Controls
Move your ship in every direction with simple one-hand control.

Screen drag-based ship movement + automatic fire. Shots use up energy, so you’ll have to stop moving and recharge at times.

Avoid enemy attacks while you skillfully trade off between movement and recharging.

■ Power-ups
Collect gems that appear when an enemy is defeated to power up your shots and destroy more enemies at once.

■ Bosses
A boss appears every when the stage advances five levels. Dodge the boss’s tricky attacks to take it down.
– Adjusted difficulty level in the early stages of the game.
– Added Practice mode

All Star Cricket Varies with device